Ian has received critical acclaim from publications as wide ranging as The Wall Street Journal and Garden & Gun.  After climbing the ranks in NYC, Ian returned to Virginia and the Shenandoah Valley to create cuisine that is both forward thinking and respectful of the past. The Shack was named one of the places for “Best Burgers in the South” by Garden & Gun and was recognized by Southern Living as one of the “Best New Restaurants.” Esquire Magazine tapped The Shack for the “Best Dish” award in the 2014 Restaurant Issue. Most recently, Ian was nominated for 2017 “Best Chef Mid-Atlantic” by the James Beard Foundation for the second time.

Ian is participating in the Hill Fire dinner on 10/89 and the Sustainable Classroom on 10/19. 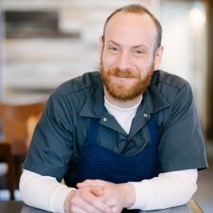